Showing posts from June, 2013
Show all

iPhone 5 Probes the Right Way, Too 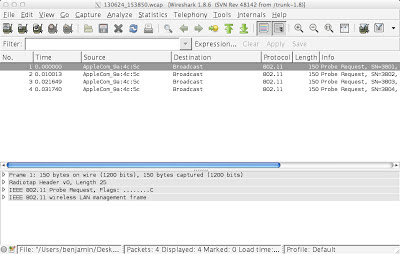 Quiet when standing still; active when moving.  That is the way that WiFi devices should treat Probe Requests.  Android devices (at least, Android devices that act like yours truly's Samsung Galaxy Tab 2) probe the right way.  After doing a quick test on the iPhone 5, it appears that Apple has their devices probe based on movement as well.

Apple iOS devices have a terrible reputation in some WiFi circles.  The author has heard complaints about mobility, stickiness, throughput capabilities and just about anything else under the sun.  Heck, just today an article was published decrying the throughput (WHO CARES?) limitations of of the new MacBook Air (not iOS, but still Apple) was viral'd around the web.

To check to see if the iPhone 5 matches the probing behavior of an Andoid device, I associated the iPhone to the office network on channel 36/+1 and started a capture on channel 44/+1.  Then I got up from my chair and started walking around while continuing to use the iPhone.

June 13, 2013
When we last left off, yours truly had noticed that an Android tablet was probing for Wi-Fi networks even when associated.  This behavior would have been unusual, as consumer-grade Wi-Fi devices historically would probe when unassociated and stop probing once a connection is made.  After a little bit more investigation, it appears there was an extenuating circumstance that was causing all of the extra probing.

I wondered if the Android tablet I have (Samsung Galaxy Tab 2.0 with 65 Mbps 802.11b/g/n WiFi) might have its probing behavior affected by movement, and sure enough it does.

I'll try to amend this blog post later to add screenshots of my captures, but for now here is a summary of what I saw:

I associated my Galaxy Tab to a WLAN that is on channel 1.  Then I captured on channel 11.  My hypothesis is that an associated device should stop probing on other channels as long as the signal is solid.

Sure enough, once I was associated on channel 1, I stopped seeing Probe Requests c…
5 comments
Read more

That Android is Quite the Prober

I was doing some work last week looking at Android devices (specifically, a Samsung Galaxy Tab 2) and I noticed some very heavy probing behavior.  We were checking out the device's behavior when it moves from AP to AP, so I set a capture for the target second AP.  I did the test (things went fine, but the WiFi Analyzer app in particular seems to really make Android devices stick to their currently associated BSS) and looked at the capture.

Seeing a ton of Probe Requests from the Tablet was expected.  What wasn't expected was the Android tablet probing even while associated to the first AP.  Even when the received signal was strong (in the -50 to -63 dBm range), the Android was going off channel to probe and probe excessively.

At this point I'm still trying to figure out if physical motion or an app (or lack thereof) caused the probing.  One thing I am pretty confident in saying already is…
2 comments
Read more
More posts