Debunking A Vulnerability Myth (Not That One...)

July 22, 2010
The Wi-Fi world was set aflutter today by a wireless IDS/IPS vendor sending out a press release advertising a flaw in WPA2 security that will be detailed during a pair of security conferences at the end of the month. (They're also holding a Webinar early next month that will detail the same flaw.) Much of the commentary on this WPA2 vulnerability has been focused on discrediting its real-world impact, but I am going to abstain from my initial temptation to join those critics. Instead, I'll take this time to discredit a supposed flaw in TKIP that was touted a couple of years ago, but for some reason never analyzed thoroughly.


The TKIP flaw has been nicknamed Beck/Tews after the researchers that discovered it. Their whitepaper and an excellent analysis of the technical theory behind the flaw by Glenn Fleishman of the superb WiFiNetNews.com blog are both available online.

A quick summary of the flaw goes something like this:

Beck and Tews noticed that when 802.11e QoS (also known as WMM, or Wi-Fi Multimedia) is used, packets can theoretically be re-injected because APs may allow up to 16 separate sequence counters, one for each Traffic ID. The idea is that if a savvy attacker kept changing Traffic IDs, he could circumvent the TSC by never re-injecting a packet using a Traffic ID that is at a lower sequence counter value than the previous packet. Beck and Tews detailed a "practical" (ironic use of that word, to be sure) analysis of this theoretical attack online, though they accidentally stated that there are 8 separate Traffic IDs rather than 16 (a fact that is irrelevant to whether the attack works).

The problem with Beck and Tews is that it appears that these gentlemen have never actually looked at a packet capture. If they would have, they'd know that APs never actually use 16 sequence counters. Or 8. Or even 4. In fact, APs never use more than one TSC. I know this because I have actually done practical WiFi sniffing.

Take a look at this Beacon frame* that I captured using (gasp) Wireshark with KisMAC and a DWL-G122 USB adapter while running Mac OS X 10.6.4: 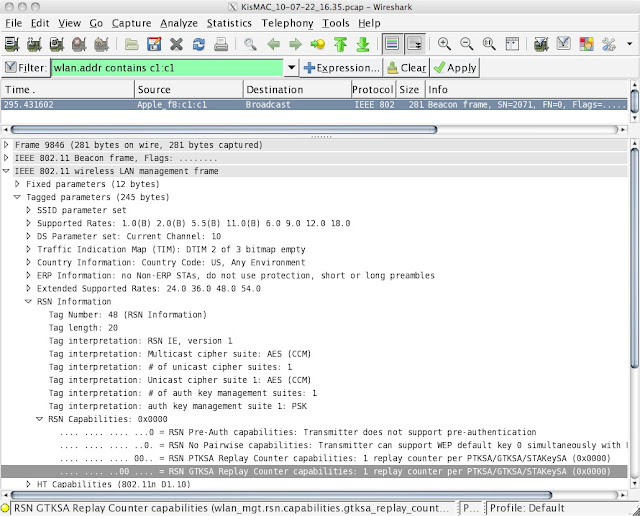 Take a look right above the line I highlighted. That line shows the PTKSA (pariwise transient key) Replay Counters field of the RSN (robust security network) information element in a Beacon frame from an AP using WPA2 and QoS. Check out the value there: 0. And check out table 7-35 on page 128 of the IEEE 802.11-2007 standard:

When the PTKSA Replay Counters value is 0 -- which it always is in every Beacon from every AP I've ever seen -- there is only one TSC value. One TSC value means that there is only one sequence of numbers in packets. One sequence of numbers means that any packet re-injection will result in re-injected packets being dropped. Re-injected packets being dropped means that the Beck/Tews vulnerability in TKIP simply does not exist.

Look, I realize that I have not seen Beacons from every AP that has ever existed. And I realize that security researchers sometimes make mistakes. But can we at least have some scrutiny of something that could be this big? TKIP is used on countless WiFi networks. Is nobody out there sniffing WiFi packets to make sure that theoretical vulnerabilities are practical vulnerabilities?

There have been an awful lot of papers and articles written that have taken the flawed Beck/Tews research as gospel. That's what happens when someone uncovers a new attack that is theoretically sound. My hope is that when this WPA2 flaw is revealed later this month, people will consider whether the theoretical insightfulness is matched with practical applicability.

*I couldn't fit the QoS-based information element from the Beacon into my screenshot, but that AP is using QoS. It also is using AES encryption rather than TKIP, but the choice of encryption type has no bearing on the PTKSA Replay Counters value.