WiPry Spectrum is Great, but it's All About the iPad

February 03, 2012
We all know that the iPad is great. We watch video on it, we play games on it and we can view our Twitter feeds on it (which, really, is where we get all important news). The only problem is, I could never do any work on it. The fact that Apple doesn't allow the internal WiFi radio to be used as for protocol analyzer software, site survey software or spectrum analyzer software always bugged me. Now, thanks to Oscium's WiPry-Spectrum, a spectrum analyzer is available, and boy does it show why the iPad is the ideal form factor for WiFi field work.


Oscium is a company that I was unfamiliar with up until I happened upon their website while searching the web for iPad apps, and there is a reason for that. They are a company that makes device testing tools, not WiFi analysis tools. Luckily, those interests overlap. People who test devices need spectrum analyzers, and so do people who sniff WiFi. In this case that leads to a beneficial crossover, though there are some ways in which you'll wish that Oscium's products were more WiFi-specific.

The WiPry product is sold as either a spectrum analyzer ($100), a power meter ($150) or a combination of the two ($200). It is a hardware product that plugs into the bottom of an Apple iOS device (iPad/iPod Touch/iPhone) and it looks like this: 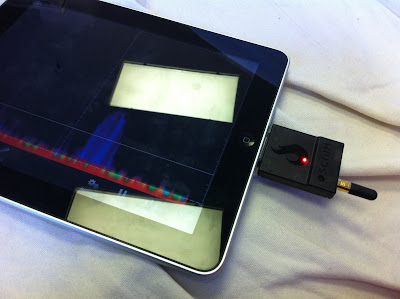 As a spectrum analyzer, the software is pretty standard. You get a view of the spectrum density (called a Heat Map in the Oscium software), average signal and max hold, just as you would with any other spectrum analyzer. There is also an option to add cursors, which simplifies determining the signal-to-noise ratio (SNR).

Here is an example of what my WiPry software looked like when I held the receiver pretty close to an 802.11g access point configured for channel 1. 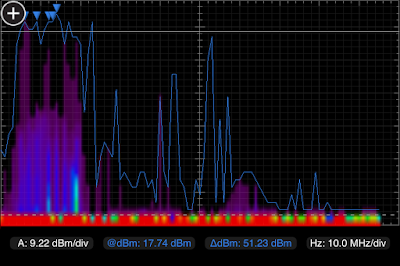 Notice how there are two horizontal lines; one solid and one dotted. Those are reference lines that tell me that there is a 51.23 dBm SNR at the maximum signal strength that was seen by the access point.

There are other nice options as well. Two that I like are the highlighting specific WiFi channels and showing a waterfall view so that the amount of time an interference source affected you can be tracked. 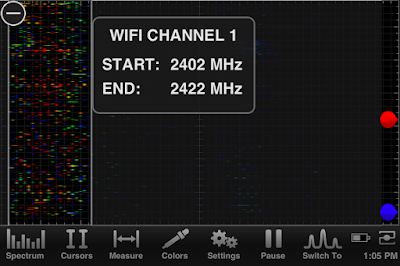 The software is good, and at $100 I'd consider this a must-have for anyone who works in WiFi and who already has an iPhone, iPad or iPod Touch.

All of this good stuff having been said, there are some warnings I have to give.

One note is that Metageek, which is a company that makes a great spectrum analyzer for Windows and Mac OS X devices, is planning to release an iPad based spectrum analyzer at some point. Now, my opinion on things like that is that I'll believe it when I see it. Metageek has released some cool looking demo videos, but until the hardware starts shipping, I will remain skeptical. Still, if you are on a very tight budget and you know that you will only be able to afford one iPad spectrum analyzer that costs $100, then you will have to decide whether to use Oscium's great tool or wait to see if you can use Metageek's possibly-even-greater tool.

The other problem is that is is tough to get exact numbers from WiPry. For example, the screen shows that the minimum received signal is -36.25 dBm and the maximum is 24.62 dBm.

Has anyone who works in WiFi ever seen a 24.62 (or even 20; or even 10!) dBm received signal strength? Something is strange here.

If you look at the second picture I posted above, you'll see that the signal from the access point in the office I write at showed a 17.74 dBm signal strength. I compared this with Metageek Chanalyzer (using the WiSpy DBx USB adapter) and I saw a signal strength of around -45 dBm at the same place from the same AP.

Whatever your opinion of Oscium's reading of signal strength, the bottom line is that if you want their number to jive with the RSSI values that WiFi stations will see, the Oscium signal strength will have to be reduced by about 63 dBm.

The other major drawback of WiPry is that there is no support for the 5 GHz band.

WiPry-Spectrum is a great product, and one larger issue that it brings up is that the iPad really is the perfect form factor for WiFi analysis. Oscium has gotten the job done by making a 30-pin adapter that does spectrum analysis. Now let's hope that Metageek, Fluke/AirMagnet, WildPackets, Ekahau and all of the other great WiFi analysis vendors follow suit.