May 23, 2013
Happy (belated) Cinco de Mayo!  In honor of Mexico (whose El Tri I actually like a heck of a lot less than Les Bleus), today's discussion of Guerra de Conduccíon has a Spanish language title.

As noted by noted sarcastor Keith R. "The R Stands for Reassociation" Parsons, in some ways wardriving is a topic whose time has passed.  We've known about it for years.  Wardriving tells hackers where your network is.  Most WiFi networks are encrypted.  What else is there?  Hackers can try to connect, but if you use a long WPA2 Personal passphrase, they won't be able to.  Hackers can try to sniff, but if you're using WPA2 Enterprise, then decryption of data frames is impossible (as far as us non-NSA employees know).

But imagine you are an NSA employee.  Or the CEO of a noted defense contractor.  Or holder of some other high-profile job where the nation's prosperity is dependent on your secrecy (like USC's head football coach).  Then if a hacker knows where you live or work, it could be a problem even if your WiFi is encrypted.  Maybe.

The topic is of interest to the author after a recent discussion with a person who is, in fact, an employee of a noted defense contractor.  The author's position is that Wardriving could be a problem.  His position is that it isn't.

What Important Person may be unaware of is her laptop is revealing her location.  Check out the capture of probe request frames I got on a recent MCO-LAX (WiFi-enabled) flight: 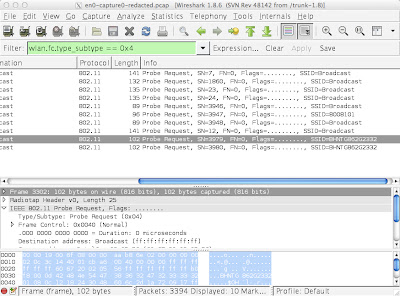 Highlighted in that Wireshark screenshot is a probe request frame looking for the SSID of "BHNTG862G2332".  That means that somebody somewhere connected to a WiFi network with that SSID some time prior to fleeing Orlando. 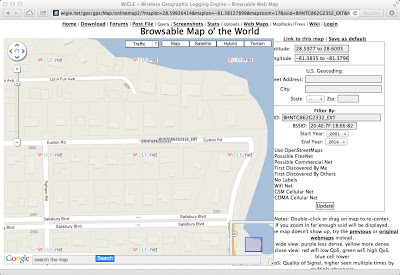 The argument that wardriving doesn't matter boils down to this: What's the hacker do now?  The hacker possibly has no idea which person has the probing device.  And even if the hacker does, additional information would be required to make this a National Security issue.

Still, "nadie sufre mas que un hombre pobre o una mujer fea" (I tried to find the Spanish cliché equivalent of "it's better to be safe than sorry", with no luck).  If you don't like the idea that someone can find out where you work or live and you think that wardriving is un problemo, then you can do the following:
Preventing your WiFi devices from revealing your location via wardriving data requires such simple steps.  Home users can just log in to their wireless routers/modems and make sure they have a generic SSID that is broadcasting.  Changes an enterprise's WiFi configuration to make it tougher for hackers to know where your office is may take some work, but it's a good idea to at least make that part of the plan the next time the WLAN gets an update.

Of course, all of this is moot if you're an Android user.  Android smartphones and tablets probe for all saved WiFi networks, whether hidden or broadcasting.  With Android phones, the only way to keep hackers from get information that could reveal the location of su casa is to keep the WiFi turned off when it's not in use.
Android Android security Android WiFi Erik Prince Wardriving Wigle