July 01, 2013
As long time readers of this blog might know, WildPackets OmniPeek has been my favorite WiFi sniffer for nearly a decade.  Then I found out about WildPackets' OmniWiFi 3-stream 802.11n USB adapter and I fell even more in love.  Now I learn that OmniPeek 7.5 has added wireless features to the Compass screen.  A good product has been made better (though time will tell if it lasts).

450 Mbps WiFi devices are the ones that give WiFi pros trouble because so many sniffing tools fail to capture 450 Mbps traffic.  The popular (at least with Wireshark devotees) AirPcap NX from Riverbed, the beloved (at least by yours truly) D-Link DWA-160 and the hacker-ish SR71-USB from Memphis Grizzlies owner Robert Cera's Ubiquiti Networks all are dual-band 802.11a/b/g/n USB adapters that can be used with WiFi sniffing software, but none of them can capture 450 Mbps data frames.  Those adapters all have two radio chains (and thus, can capture two-stream 802.11n) and 450 Mbps traffic uses three-stream 802.11n.

OmniWiFi is a USB adapter that gives WildPackets OmniPeek users the ability to capture three-stream 802.11n traffic.  It also dynamically adjusts its capture settings when 802.11n traffic is in the air.  When my iPhone was sending and receiving data frames over a 40 MHz channel, OmniWiFi captured all 40 MHz.  When my acknowledgment, request to send or clear to send frames went out on a 20 MHz channel, OmniWiFi caught that as well.

The limitation of OmniWiFi is that it is 802.11n, and the consumer side of WiFi is moving towards 802.11ac.  Management frames and most control frames will still be captured with OmniWiFi.  Data frames over WLANs that have yet to upgrade of 802.11ac access points, as well.  The problem is that if a coffee shop on the ground floor of an office building decides to buy a new Apple Airport Extreme, you won't be able to tell exactly how the data traffic going to and from a new Macbook Air is affecting your WLAN.

When I spoke to a representative from WildPackets, I was told that an 802.11ac version of OmniWiFi might be in the works.

To repeat:  When I spoke to a representative (someone whose job description presumably includes promoting the company) from WildPackets (the company who makes the best enterprise-grade 802.11n WiFi sniffing solution), I (a WiFi sniffing blogger) was told that an 802.11ac (the hot new standard) version of OmniWiFi (the best wireless hardware ever created by the company) might (as in, might-or-might-not) be in the works.

When I was told that an 802.11ac version of OmniWiFi was not a certainty, I sort of couldn't believe it. The WildPackets rep (a technical guy who knows 802.11 quite well) shoveled over some mumbo-jumbo about OmniPeek capture support in 802.11ac access points (from Ruckus Wireless) and the speed limitations of the USB 3.0 interface (and I was proud that I avoided giving my stump speech on the lack of value in throughput tests in response).  He said that USB-based wireless capture was limiting, and that most WildPackets customers prefer to capture from APs, anyway.  Great.  Fantastic.  But how about using a WiFi sniffer to solve the tough problems?  That requires field work.  That requires a portable device from which to capture.  That is not the type of thing you do from an AP.

I am going to enjoy OmniWiFi while 802.11n continues to be relevant, but I really, really, really hope that WildPackets pushes Ralink (makers of the current 802.11n OmniWiFi chipset) to make a USB adapter that does 802.11ac capture.  I don't want to have to write a blog post titled, "Worthless Capture, Part III".

My conversation with the WildPackets rep also covered OmniPeek 7.5.  If you are a user of OmniPeek Basic ($1,200 USD), then you can skip the rest of this blog.  OmniPeek 7.5 doesn't add anything all that new.  The Packets screen has a new MCS (modulation and coding scheme) column and a new Spatial Streams column (see below). 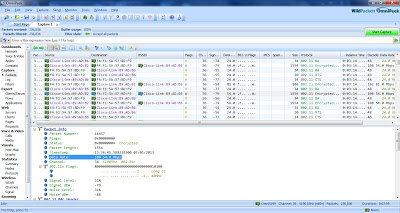 Neither the MCS column nor the Spatial Streams column works, so forget it.  Maybe OmniPeek will get things going in a future update, but that picture above clearly shows 54 Mbps (which could be single stream 802.11a/g or dual stream, MCS 3 802.11n) data and it clearly shows no indication of which type of 54 Mbps data it is (answer: 802.11n.  Now can you tell me in the Comments how I know that from looking at JUST THE PACKETS in this capture...?).  (To be fair, the WildPackets rep used Go To Meeting to show me a capture that had information in the MCS and Spatial Streams columns.  It did not work for me, however.)

The OmniPeek Compass is something that has been present in OmniPeek, but I never used to use it because it didn't give me relevant WiFi information.  I want to know Data Rates.  I want to know Retry percentages.  I don't care about Mbps averages or conversations.  Save that for wired sniffing.  Wireless sniffing should be all about wireless (connection, performance, security, etc.) analysis.

OmniPeek Compass now shows data rate and retry information, and it is great. 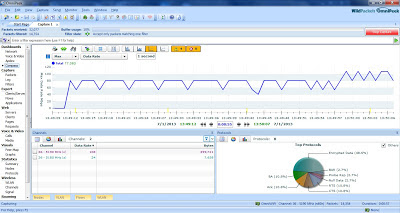 The screenshot above shows that my smartphone is using higher rates than my AP.  On the left hand side (in the area where I was applying the To Phone filter) the maximum rate fluctuated between 54 and 81 Mbps (MCS 3 and 4).  Once I switched to the From Phone filter, the maximum rate immediately spiked to being between 81 and 108 Mbps (MCS 4 and 5).  That tells me that my phone is very aggressive in trying to send data at high rates.

A quick flip of the Compass screen from Rates to Retries allows me to see if my smartphone's use of high rates has consequences. 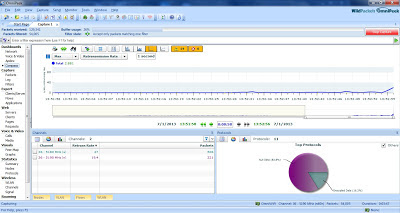 Again, the To Phone filter was applied first (on the left of the graph) and the From Phone filter was applied after (on the right).  Data going to my smartphone was almost never retried (which made sense, since the office uses a 5 GHz channel that is unoccupied by any other WiFi networks).  Once the filter switched to data being sent by my phone, Retries started to show.  The percentages were still below 8% (which is the rule-of-thumb number I use to determine if Retries are a problem), but they were still there.  It means that, at least for the application I was running for the test, the iPhone 5 might be a little bit better off using lower rates so that Retries can be almost entirely eliminated.

That is just one example.  One of the best things about OmniPeek is the myriad ways that filters can be configured and applied, and Compass is a perfect place to see what those filtered devices and protocols are doing in real time.

OmniPeek 7.5 is worth having, but it could still be improved.  I'd still like to see WildPackets copy off of the superb work that Metageek did with Eye P.A. and add a Time metric in addition to Packets and Bytes.  OmniPeek also needs to give better breakdowns of exactly how many packets or bytes are using which data rates.  Still, it remains a great tool and the additions to Compass in version 7.5 make it even more useful.
802.11ac 802.11n Data rates iPhone 5 OmniPeek OmniWiFi Retries WildPackets