Now It's AirMagnet's Turn to Show Us QoS

November 20, 2013
In my last (real) post, I detailed how I used WildPackets OmniPeek to solve an iPhone 5 QoS problem.  But what about AirMagnet WiFi Analyzer?  I am a fan of both of those fine WiFi sniffers, so I figure it's a good idea to show you how QoS can be analyzed with Fluke Networks' signature WiFi protocol analyzer.

WildPackets OmniPeek is more of a hardcore protocol analyzer than AirMagnet WiFi Analyzer is.  If you're going to be doing the type of sniffing I detailed in the last blog post, you will have an easier go of it with WildPackets' product.  But AirMagnet is popular and both tools are expensive.  So if you happen to be a gal (or guy) who needs to troubleshoot WiFi voice or video and you have AirMagnet, this brief tutorial should help.

To begin analyzing QoS, one must first capture on the VoFi devices channel.  In my case I associated my iPhone 5 to a network with the SSID of "R&T".  Then I looked at the Start screen in AirMagnet: 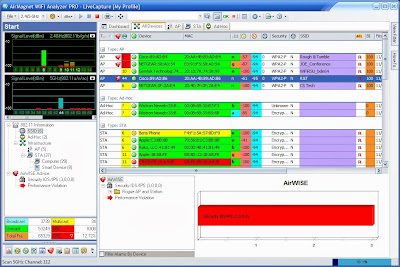 Once you know the channel that your VoFi device is on, then next step is to start capturing and viewing frames in the Decodes screen of AirMagnet.  It is at this point that I should note that the wise Keith Parsons once told me, "If you're looking at the decodes in AirMagnet, then you're in the wrong place."  And that is true, usually.  But in the specific case of needing to find out which WMM QoS categories are being used by your VoIP app, then the Decodes screen is the right place to be.

I navigated to the Decodes screen in order to view captured frames.  I selected channel 44 as my capture channel and then I applied a capture filter for my iPhone, as shown here: 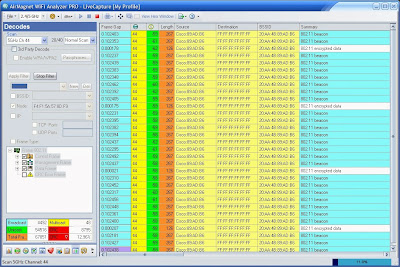 Once I had my filtered capture running, my step was to generate some voice traffic so that I could test QoS.  I used Truphone, which is a WiFi-based calling app.

After capturing VoFi frames, WMM QoS categories can be seen by opening a data frame and viewing the 802.11 header.  The 802.11 header has a field called "QoS Control", and inside that field the TID (traffic identifier) will indicate which WMM access category is being used.  For Truphone, the category was Best Effort: 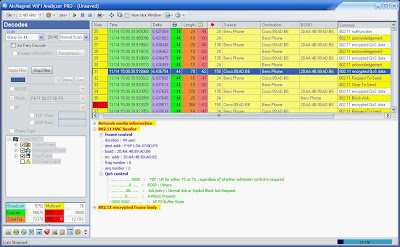 AirMagnet makes it a little bit more difficult to see the WWM QoS Category than other WiFi sniffers do.  For one thing in AirMagnet a capture must be stopped before frame decodes may be viewed.  For another the TID subfield is not summarized.  When the TID value is zero that means Best Effort, which is simple to remember.  The other categories are a bit more odd.  Voice is 5 or 6.  Video is 3 or 4.  Background is 1 or 2.  Seeing the raw bits of the TID field like in the AirMagnet capture above is fine for people who have memorized those numbers.  WildPackets OmniPeek and Wireshark decipher the number and tell you the category, which makes things easier for people who spend less time focusing on WiFi.  Like in this example below, it would've been nice if AirMagnet made it clearer that the frame I was looking at it Voice instead of forcing me to remember that 0110 in binary is 6: 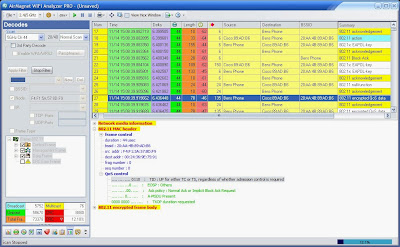 In summation, the process for figuring out whether WiFi-based QoS will help your applications is rather straightforward.  Capture on the channel.  Run the app.  View the headers.  And if you do that it can really help you predict whether your VoFi apps will work well on a crowded channel.