Not Sniffing, But... Oscium WiPry-Pro

October 27, 2014
It's been over two-and-a-half years since yours truly last wrote about Oscium WiPry, but there is reason to today: they fixed it!  Now the only 2.4 GHz spectrum analyzer for Apple iOS reads signal level correctly.  And using the new, corrected version reminded the author why WiPry is a nice product at a reasonable price.

The concept of a spectrum analyzer hasn't changed in decades, and for good reason.  It's simple.  A device listens for activity at a given frequency and displays a readout of said activity, usually in a fancy, colorful way.

What hadn't changed in the last couple of years was the signal readings for Oscium WiPry.  They remained about 63 dB higher than they should have been.  The incorrect display wasn't a dealbreaker, because WiFi spectrum analysis isn't (or, at least, shouldn't be) about precise decibel levels.  It's about locating interference sources.  WiPry did a fine job showing lots of activity when an interference source was near.

The new WiPry is an improvement.  The signal readings are finally accurate! 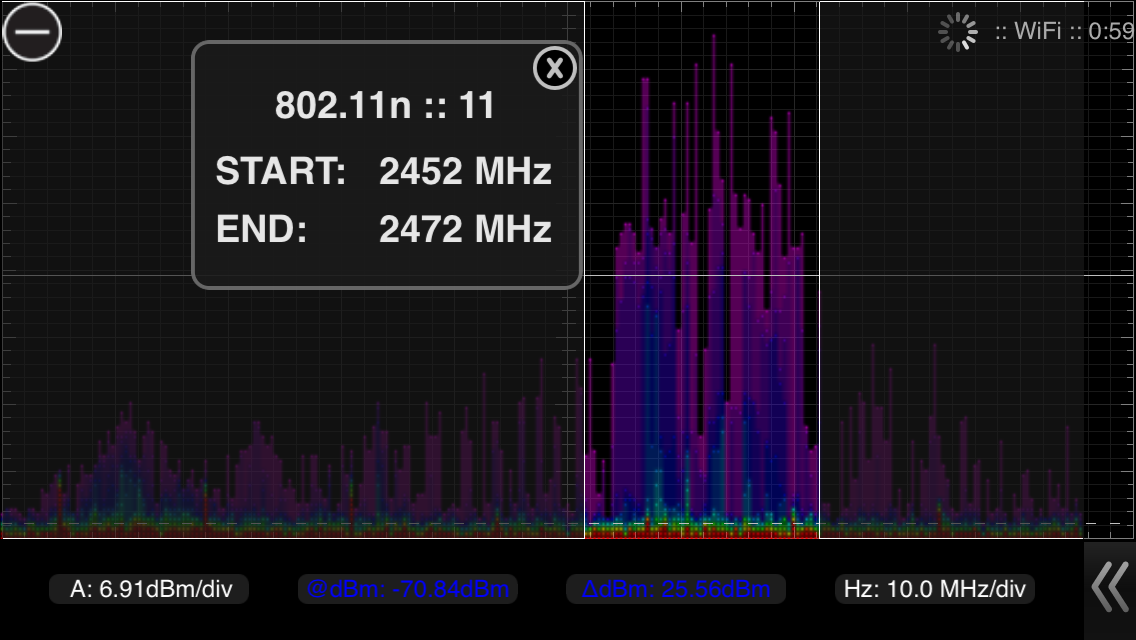 Check that above screenshot out.  The horizontal line reads around -70 dBm.  The SNR comparison with the dotted noise floor line below is about 25 dB.  Excellent!  Those were the real numbers in the office where I ran my test.

Oscium made an adjustment to the WiPry's form factor in giving it a Lightning connector instead of the old 30-pin connector.  That was a nice update, especially since I have been using my iPod Touch a lot for troubleshooting and surveying.  I've learned that spectrum analysis is really only useful to WiFi folks when looking for an interference source, so I don't really need a device the size of an iPad.      I prefer the lighter, smaller iPod Touch.  And if you do like the screen size of the iPad, then Lightning will work for any iPad that was released after the iPad 3.

(At this point I should offer a link to my previous blog post on why I find spectrum analysis to be an inadequate form of WiFi troubleshooting.  That post was written months ago, but if anything my view on protocol analyzers' superiority to spectrum analyzers has only hardened.  Maybe someone will let me debate the topic at the next WLAN Professionals Conference.)

The Oscium WiPry Pro is $200 and the software is a free download from the App Store.  If you're just using a spectrum analyzer to locate interference sources, then it's a nice piece of equipment to have.