Two Radios Are Better Than One (Unless They're Both 5 GHz)

March 20, 2015
If there's one thing we've learned about WiFi over the years, it's that problems get fixed.  Site surveys used to be sooo annoying.  So we got controllers with auto-RF.  Guests used to complain and complain that we didn't have WiFi for them.  So we got captive portals.  And so the worl--

Wait a minute.  Auto-RF really doesn't work and we still need site surveys.  And captive portals annoy our friends in desktop support as much as they annoy our guests, plus they drag down overall WiFi performance.  Hmmm...  Let's start over:

If there's one thing that we've learned about WiFi over the years, it's that sometimes what seems like a good solution to a problem only ends up making things worse.

Which brings us to our latest solution-that-only-makes-things-worse: Dual-radio APs with band-selectable radios.

Last week, I was sitting in an office, minding my own business when I got a call.  A friend of mine who works in WiFi had a question for me:  "What do you know about these band-selectable APs from Xirrus?"  I answered that I hadn't been paying close attention to Xirrus's product line, and thus I was unaware that such APs even existed.

My friend was quite negative on the idea of band-selectable APs.  He was worried about interference.  He is a big RF guy (probably one of the few WiFi folks I know who is more of an RF person and I am, in fact) and he just did not buy the idea that two radios in the same AP (or, "box" as he called it) could transmit or receive at the same time in the same frequency band.

I, being the staunch contrarian that I am, was more sympathetic to the idea of band-selectable AP radios.  I was trying to imagine a real world situation where band-selectable radios would help.  I thought of convention halls and football stadiums; places where such a high number of users congregate in one area that you might need as many 5 GHz radios as possible.  If a space -- a convention hall, for example -- had six band-static APs (that's what I'll call APs that one radio each for the 2.4 GHz and the 5 GHz bands) installed, then three of the 2.4 GHz radios should be disabled.  That would make for nine total AP radios to service the high-density space.  With band-selectable APs, all twelve of the AP radios in the six installed APs would be available.  The wireless LAN could be installed with three traditional 2.4/5 GHz APs and three non-traditional dual 5 GHz APs. 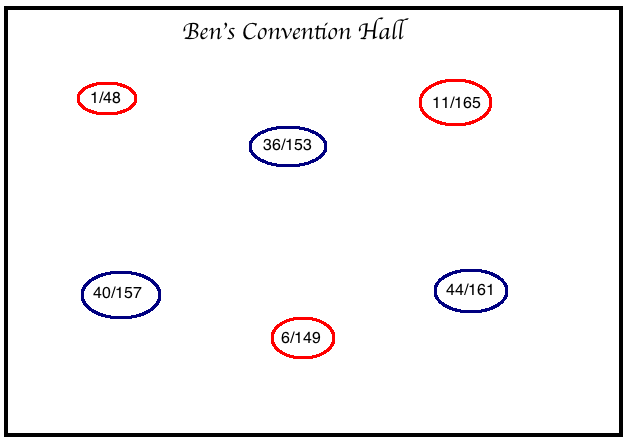 "See," I said to my friend.  "I would be able to space out the channels when setting both radios to 5 GHz on the same AP.  It would be better to have both AP radios enabled, even if interference makes it so that a two-radio AP does not give two-times the performance of a single radio AP."  And the throughput tests (and, yes, I hate throughput tests but I also know that other people want to know what they say) looked better (approximately 90 Mbps of total single-stream, 802.11n throughput with two 5 GHz radios enabled on a single AP, compared to around 70 Mbps when only one 5 GHz radio was enabled).  Plus there's the extra associations (typically enterprise APs have per-radio association limits) when both AP radios are enabled. 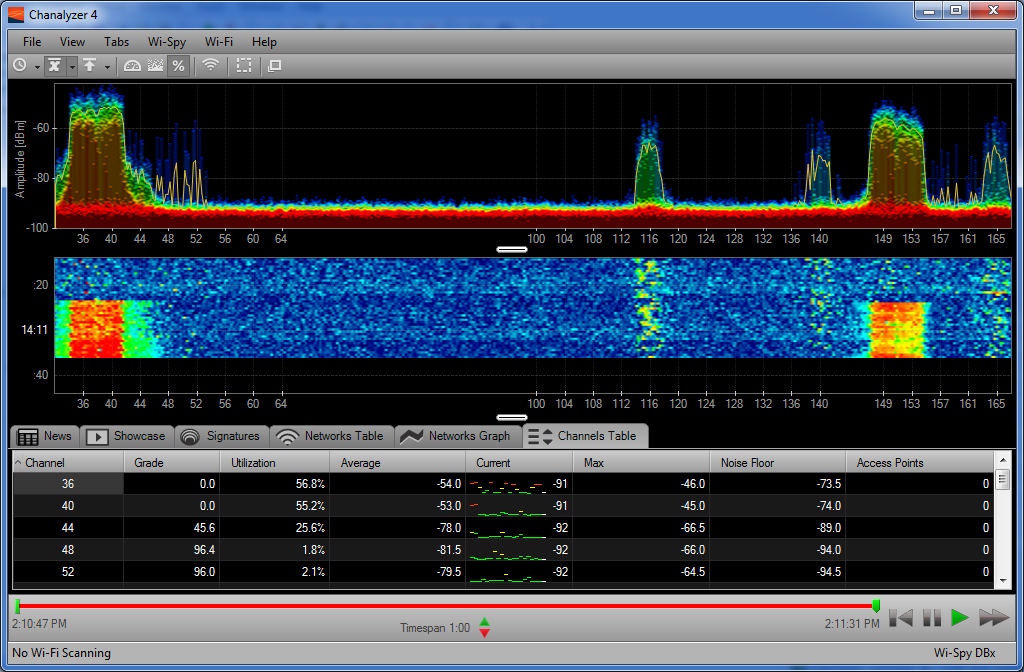 That's a screenshot of Chanalyzer taken during my testing.  I placed my WiSpy less than three feet from the Xirrus 620 access point, and there was essentially no sign of interference on my Chanalyzer screen.

So, there I had it.  There are real-world cases where band-selectable APs are better than band-static APs.

That little question (and, in the interest of full disclosure, I must admit that my friend was not present while I tested.  "Check the Retries" was part of my internal monologue) and the path it led me on made me change my entire opinion.

As long as there was only one AP radio on the 5 GHz band, the AP performed well.  Uplink retry rates (counting bytes retried, not packets retried) were around 3% and downlink retries were around 16% (the lower uplink Retry percentage is because I was testing using an iPad, and iOS devices use RTS/CTS to improve performance in congested areas).  Those numbers stayed consistent between tests where one AP radio was disabled and where one AP radio was using the 2.4 GHz band.

When both AP radios were configured for the 5 GHz band, the AP melted down.  It didn't literally melt down, of course, and even the throughput numbers didn't melt down (as mentioned earlier, throughput did increase by almost 30% when a second 5 GHz radio was enabled on the AP).  But the Retry percentages jumped so dramatically (to around 20% on the uplink and 34% on the downlink) that a typical ENTERPRISE WIRELESS NETWORK (which, honestly, is what I care about.  I couldn't care less what Chariot tells me in a lab) would face CERTAIN MELTDOWN if it became densely populated with users. 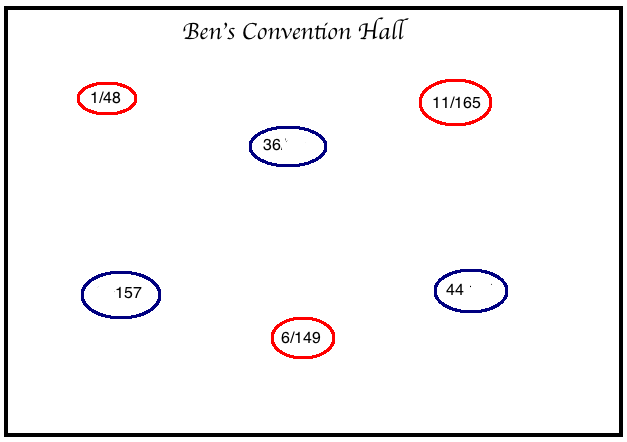 will work better than the other Ben's Convention Hall idea that was illustrated earlier on.

I have one final thought after experimenting with the Xirrus 620 AP: We need to stop these things.

Many of us know and remember the damage that previous well-intended, wrongheaded WiFi solutions caused.  We know how many problems were caused when people started accepting auto-RF in lieu of a site survey.  We are still dealing with the legions of poor-performing wireless networks that have been hamstrung by the captive portal.  Let's try to nip this in the bud.  Band-selectable, dual-radio APs will look good in a throughput test and they'll be tempting to folks who have yet to learn about WiFi.  But we should know better.  We should know that, in this case, one AP radio is better than two.

If you like my blog, you can support it by shopping through my Amazon link or donating Bitcoin to 1N8m1o9phSkFXpa9VUrMVHx4LJWfratseU
band-selectable APs Retries throughput tests