October 13, 2017
Wi-Fi is a technology used around the world and we, as Americans, respect all cultures and creeds.  That said, occasionally we like to celebrate ourselves (NSFW, as if the title didn't make it obvious):

Unfortunately, America has been behind the times in Wi-Fi.  No longer!  We now have motherf*#king 2.4 GHz channels 12 and 13.

This blog has a rigid rule to avoid politics, so I'll phrase this as apolitically as I possibly can: from January 20, 2009 to January 19, 2016, America's wireless authority -- the Federal Communications Commission (FCC) -- repeatedly authored rules that damaged Wi-Fi.  In 2010 the FCC banned Wi-Fi on channels 120 through 128, in 2014 the FCC messed up channels 52 through 144 by requiring additional dynamic frequency selection (DFS) scanning and in 2016 the FCC declined a proposal by satellite phone provider Globalstar to allow 2.4 GHz channels 12 and 13 to be used for "terrestrial, low power services" (TLPS), which just so happen to have the exact same rules and protocols as 2.4 GHz Wi-Fi.

In fairness to our beloved/reviled former President's FCC, channels 120 through 128 were re-instated in 2014 and the DFS scanning rules don't effect most well-designed enterprise Wi-Fi networks because a well-designed Wi-Fi network doesn't use DFS channels (future blog topic alert!).

Today America has a President whose FCC is much friendlier to Wi-Fi.  Less than a month after the man who likes Real News better than Fake News took office, the FCC approved Globalstar's petition, thus opening up channels 12 and 13 for 802.11n (2.4 GHz) Wi-Fi networks.

During some down time during my travels today (which is my carny way of saying that I'm stuck in an airport), I decided to check to see if 2.4 GHz channels 12 and 13 were being adopted by Wi-Fi devices. 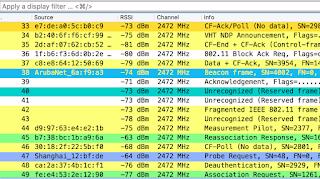 So, I captured on Channel 13 and isolated the Probe Request frames from one device: 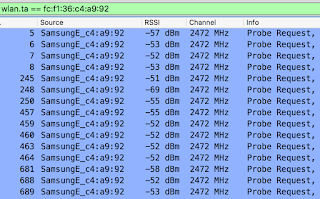 Then I captured on Channel 11 and isolated the Probe Request frames from the same device:

While it is true that one Wi-Fi device in one airport using Channel 13 is no guarantee of coming widespread support for TLPS, it is a sign that Channels 12 and 13 could be coming to America to save the motherf*#kin' day for 2.4 GHz Wi-Fi.


If you like my blog, you can support it by shopping through my Amazon link.  Thank you.