Stay Out The Trap (f.k.a. The Corner)


The average IT professional may not view Wi-Fi "Design" as being directly analogous to the inner city drug trade.  Yet, when Wi-Fi Professionals go through the process of choosing AP installation locations, they should know what even the most novice B.G. drug dealer knows: that The Corner is also The Trap.

When embarking on a Wi-Fi "Design", some things are obvious.  Coverage is needed everywhere.  The number of available APs must be appropriate for the number of expected Wi-Fi devices.  Physical objects (walls, doors, et al.) should be accounted for.

The reason why Hidden Node is a problem is that Wi-Fi devices rely on "hearing" one another (called the Physical Carrier Sense in the IEEE 802.11 Standard) as the primary method of avoiding interference.  Therefore, if devices have the ability to interfere, but cannot "hear", then interference is likely to occur.

I have noticed that a lot of Wi-Fi installations seem to have been "designed" without taking Hidden Node problems into account.  One of the most common locations where this particular "design" problem happens is when dealing with the corners of a building.  The corner of a building can often be a trap, where Wi-Fi "designs" can get the corner and surrounding areas covered (with support for high densities of Wi-Fi devices, even), but leave those areas vulnerable to Hidden Node problems.

Here's an example of a Wi-Fi installation that I recently "designed", where I had to avoid letting The Corner become The Trap: 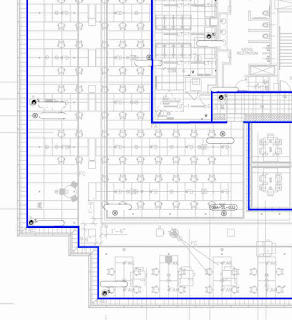 The graphic above is from the "southwest" corner of an open office space.  I've outlined the significant objects (walls, doors, heavy glass, et al.) with blue lines. 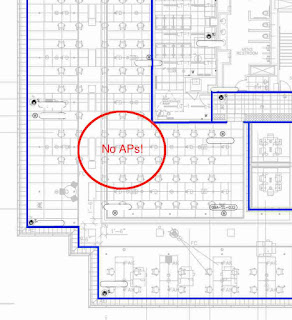 The key to avoid letting The Corner become The Trap is to avoid installing APs right near the "point" of the corner.

Notice that, in my "design", there are no encircled "W" markings (we used an encircled "W" on this project because the installers liked to refer to APs as "WAPs") in The Trap (the area labeled "No APs!").

The reason why I kept APs out of The Trap is because I didn't want this: 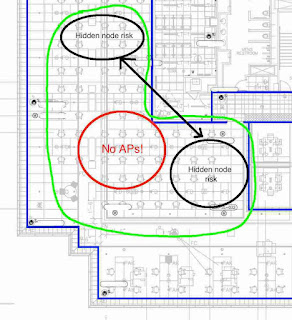 If I had an AP mounted in The Trap, there is an excellent possibility that it would have covered Wi-Fi devices to the "east" and to the "north" of the AP.  That would have increased the risk of the Hidden Node problem because devices in the two "Hidden node risk" areas could have been covered by the same AP ("can interfere"), but been blocked by the walls & objects of the IDF ("cannot 'hear'").

The bottom line for Wi-Fi folks embarking on a "design" is to take the advice that has been offered to at-risk inner city youth for many a year: Stay Out The Trap.