Using OmniPeek To Learn About the iPhone X

February 02, 2018
One of my favorite things to do is teach Wi-Fi, and one of my favorite tools for teaching is Savvius OmniPeek.  The good folks at Savvius were nice enough to provide OmniPeek for the Wi-Fi classes I oversee at Global Knowledge, and so I want to offer a taste of how OmniPeek can be used to learn about Wi-Fi device behavior, specifically with the iPhone X.

One of the things I like using OmniPeek for when teaching is illustrating the different ways that Wi-Fi devices and APs use the 802.11 standard.  An example is what happens when devices and APs send data.

Hereis how I use OmniPeek to teach students how to determine which of the three transmission options are used after their devices or APs win Arbitration:

1) First, OmniPeek must recognize a Wi-Fi adapter that can be used for Monitor Mode capture.  This can be configured in the Adapter screen of OmniPeek's Capture Options window. 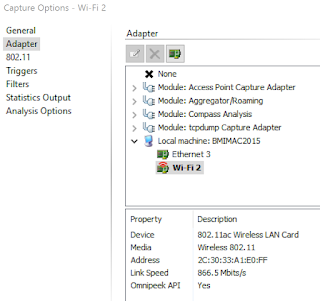 The screenshot above is from a popup that comes up after right-clicking on the current Channel that OmniPeek is capturing on.

3) After beginning a capture on the channel that your device and AP are communicating on, I recommend naming your AP and device.  Naming APs and/or devices in OmniPeek can be done in a number of ways.  I like doing it by going to the WLAN screen. 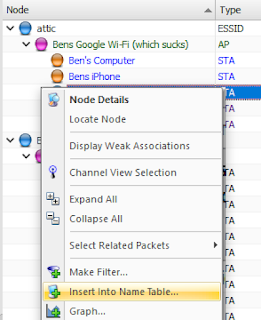 All I had to do was find the iPhone X's Wi-Fi MAC address (Settings -> General -> About on the iPhone or any other iOS device), right-click the MAC address and then select "Insert Into Name Table".

4) Once APs and/or devices are named, the next step is to sift through captured frames to find Wi-Fi transmission sequences.  Sometimes this can be a little tricky, as OmniPeek captures all Wi-Fi frames on the channel, not just yours.  If you are having trouble finding frames transmitted by your device or AP, go to the WLAN screen, right-click your device or AP and choose Select Related Packets -> By Source.  That will take you to the Packets screen, where frames sourced to your device or AP will be highlighted.

In my case, I got lucky.  I saw frames transmitted by my iPhone X right at the top of my capture.  What's more, the data transmission pattern was easily identifiable as using a TXOP to reserve the channel before transmitting data.

The RTS and the CTS keep nearby devices and APs on the channel quiet, then the normal Data/Ack sequence (in this case using a Block Acknowledgment, or BA) follows.

The evidence from OmniPeek shows that the iPhone -- at least when running iOS 11.2.5 -- uses the TXOP for transmitting data.

There are plenty of ways in which device behavior can vary, but the basic process of using OmniPeek to learn about them remains the same: install a proper capture adapter, capture on the channel of the AP & device, name the device, then look for patterns in how the device transmits.