The Wi-Fi Stand Stands Up

March 05, 2018
The recently completed Wireless LAN Professionals Conference (WLPC) was nice enough to gift attendees a Wi-Fi Stand.  The product is a clever one, but as a person who believes in measuring Wi-Fi propagation accurately when surveying, I was concerned.  When I tested it, my results showed that my concerns appear to be unfounded.

The Wi-Fi stand is an apparatus that screws in to the top of a tripod to make a vertical, rectangular structure that allows enterprise APs to be hung upside down from standard ceiling mounts.  If that is a little bit hard to visualize, here's my best shot at describing it: 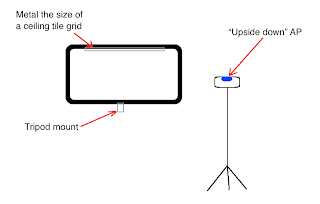 I am a big believer in designing & surveying Wi-Fi using real, production devices, and a longstanding problem with that has been temporarily mounting APs for the design/survey.  I've tried zip ties, and velcro.  I've gone with makeshift wooden & metal mounts on a tripod.  Sometimes things work well and other times it can get almost embarrassing.  No consultant wants to look a client in the eye after one of the client's APs goes tumbling from a survey mount.

When I got my hands on a Wi-Fi Stand and found out what it is supposed to do, I was very excited.  Essentially, it was the exact product I've been looking for.

There was, however, one outstanding issue: I was concerned that the Wi-Fi Stand would alter the propagation of the Wi-Fi signal.  A major concept I try to instill to consulting clients, blog & whitepaper readers, and students in Global Knowledge Wi-Fi classes is that designing & surveying of Wi-Fi should be done in as real an environment as possible.  Don't wait until the school is empty.  Don't use a USB adapter or Sidekick to read signal strength.  Don't walk or ride a segway during the survey.  Do what the real users will do.  If they're on iPhone 6's, use an iPhone 6.  If they sit at desks, then sit at a desk.  If I were to attach an AP to an apparatus that significantly affects Wi-Fi propagation, then I would be a Wi-Fi surveying hypocrite.  And nobody likes a hypocrite.

I decided, therefore, to do an informal test of the Wi-Fi Stand's effect on Wi-Fi propagation.  First I attached an OpenMesh AP to the ceiling of my office and tracked RSSI using the Airport Utility app on my iPhone 6S, then I attacked the AP to the Wi-Fi Stand and elevated my tripod to get the AP as close to the ceiling as possible before running the same test.

My results?  The RSSI numbers received by my iPhone 6S were within a reasonable range with and without the Wi-Fi Stand.  (Which is good!).  I went north, south, east, and west from the mounting location, and the cumulative difference in RSSI when using the Wi-Fi Stand was 5 dB higher (an average of +1.25 dB per measuring location) for the 2.4 GHz AP radio and 1 dB lower (-0.25 dB average) for the 5 GHz AP radio.

Admittedly, this was not rigorous science.  My sample size was small, there were small variations in AP height, iPhone 6S location & orientation, and probably other unwanted variables.  Plus, I did see some variations that pushed the boundaries of "reasonable".  For example, my 5 GHz readings got as high as -59 dBm without the Wi-Fi Stand, but never went above -68 dBm with it.  The other 5 GHz readings were all higher when using the Wi-Fi Stand, which is why the cumulative difference for all four readings was only 1 dB.

I encourage other Wi-Fi folks to do their own testing with the Wi-Fi Stand, but my results have left me feeling good about using it the next time I do a Wi-Fi design/survey.

(And I would be remiss if I didn't mention that I am always for hire if you need a seasoned pro to assist you in designing, surveying, or fixing your Wi-Fi.  Email me below if you are interested.)