August 30, 2018
Editor's note: In the original publication of this article, the relationship between Wi-Fi channel width and SNR was described imprecisely.  While the point of the article was correct -- that wider channel widths increase the likelihood of Wi-Fi frame failures for mobile client devices -- the mistakes have been corrected.  Thank you to Adrian Granados.


Wi-Fi has its own brand of roaming, and there is one aspect of Wi-Fi roaming that often gets overlooked: 40 MHz and 80 MHz wide channels can make Wi-Fi users feel like they've been bounced from the Love Shack.

Much has been written and spoken about the pros and cons of the three Wi-Fi channel widths: 20 MHz, 40 MHz, and 80 MHz.

Recommendations I have seen typically involve using 20 MHz wide channels if the budget allows for a dense deployment and/or if a large number of client devices are going to be present.  40 MHz wide channels tend to be recommended for organizations that either don't have the budget for a dense deployment of APs, or organizations that need to squeeze out the highest amount of per-device throughput.  80 MHz wide channels are rarely recommended in the enterprise, because the number of devices per-AP frequently would become overwhelming, due to the limited number of non-interfering channels.

To understand why wider channels can harm Wi-Fi roaming, one must understand the relationship between signal-to-noise ratio (SNR) and Wi-Fi communication.  SNR is the key factor in determining whether transmitted Wi-Fi frames (commonly called "packets") will be successful.  Low SNR causes Wi-Fi data to fail.  At every Wi-Fi data rate, there is a minimum SNR required for successful frame communication.

In other words, when I look at my iMac and see that it is transmitting frames at a data rate of 878 Mbps... 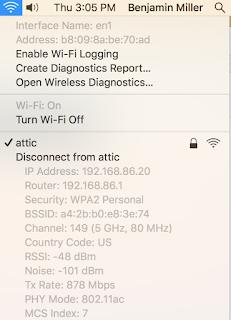 ...that means that my wireless router has to receive those transmitted frames at a high enough SNR to be able to "hear" (a.k.a. "de-modulate", for you techy readers) 878 Mbps frames.  The higher a frame's data rate, the higher the SNR required to "hear" that frame.

An overlooked aspect of SNR is the fact that SNR requirements noise levels -- the "N" in SNR -- increase and decrease with channel width.  If a channel is twice as wide, then the required SNR to be able to "hear" a frame at a given data rate is twice as high the same amount of RF activity on the channel will register as twice the amount of noise.  And if the channel is half as wide, then the required SNR level of noise registered by the receiving Wi-Fi radio is cut in half, as well.  Andrew Von Nagy's Revolution Wi-Fi blog covered the relationship between channel width and SNR noise quite well, in my opinion, a few years ago.

The channel width/SNRnoise relationship can affect Wi-Fi roaming because moving Wi-Fi devices tend to be susceptible to low signal incidents.  Low received signal strength (at either the AP or the client device) can occur in mobile environments due to distance, or "sticky" clients, or the way people hold client devices in their hands, or due to physical environment factors like closing doors, moving forklifts, and more.  When low signal incidents happen in environments where noise levels are naturally two times or four times as high, SNR levels may become perilous for Wi-Fi frame communicaiton.

As with many Wi-Fi issues, the knee-jerk reaction of Wi-Fi professionals may be to cry, "design!"

Yes, yes.  Design matters.  Ideally, the two APs in the graphic above will be positioned so that the phone never has to use an SNR so low that 40 or 80 MHz wide channels become inoperable.

My experience, on the other hand, is that design cannot overcome some of the issues that arise when 40 or 80 MHz wide channels are used in high mobility environments.  Even with an "optimal" design, an AP or client device could stubbornly transmit using higher-than-expected data rates, thus causing data frame failures even with a "good" SNR.  When the SNR signal has to be at double (for 40 MHz wide channels) or quadruple (for 80 MHz) the level in order for frames to be successful, the problem of stubbornly high data rates is exacerbated.  Or, client devices may be "sticky", and stay connected to a low SNR signal AP, even though the client has moved close to a higher SNR signal AP. 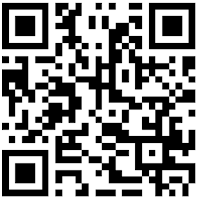