Spectrum? It Damn Near Killed 'Em

Well, it's time to make amends.  Spectrum analysis is pretty darned useful, too.  And the spectrum analyzer that I use (Metageek's WiSpy DBx with Chanalyzer) underwent a notable update in recent months.  Here, then, is an update on Chanalyzer and a reminder of what spectrum analyzers can be useful for.

For quite some time Metageek's spectrum analysis suite (consisting of the WiSpy USB adapter and the Chanalyzer software application) has been the thrifty man(and woman)'s tool of choice for analyzing WiFi frequencies.  The original Metageek WiSpy (a 2.4 GHz-only device without an external antenna interface) was a $100 (all prices in USD) USB adapter and the original Chanalyzer software was free.  Things evolved and it started to become necessary to use the dual-band (2.4 GHz/5 GHz) WiSpy DBx, which is a $600 USB adapter.  The software remained free and Metageek's $600 hardware/software package became my choice of spectrum analyzer for quite some time.

A few months ago, Metageek decided to change the spirit of their company.  Instead of keeping their most popular software products like Chanalyzer and inSSIDer free, they decided to charge for them.  Chanalyzer 5 (the current software attaché to WiSpy DBx) is $350 and previous Chanalyzer versions are no longer available via download through Metageek's website.  inSSIDer became $20, with an optional WiSpy Mini USB adapter that bumps the package to $200.

My natural instinct was to chafe at the prospect of having to pay for software that used to be free, but a broad look at the facts cooled me down.  WiFi folks still often need a spectrum analyzer.  Metageek's spectrum analyzer package is still the least expensive (at least as professional-grade analyzers go).  And after using Chanalyzer 5 it's clear that the product is an upgrade compared to the old free version.

There are two notable improvements that Chanalyzer 5 gave me over the old, free version: a better layout and better device identification.  The layout is a matter of taste, I suppose, but I really like the move to have the waterfall view go vertically instead of horizontally.  Check out the old look: 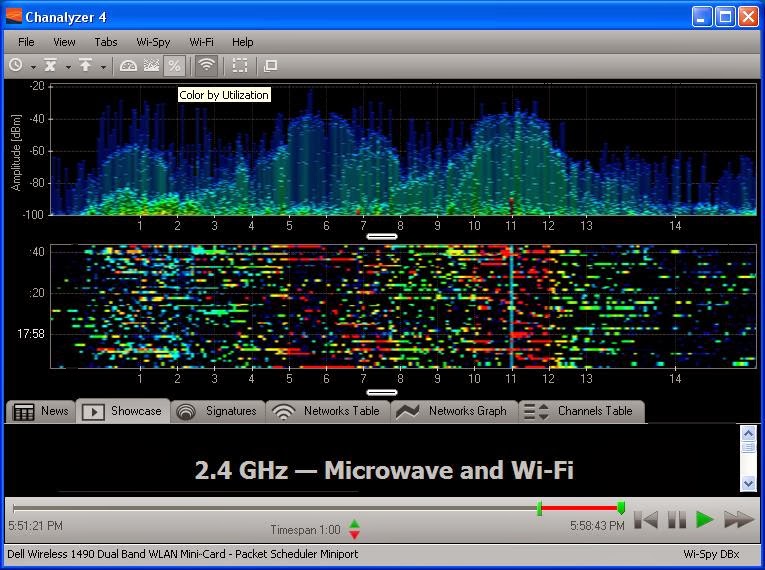 The waterfall view is in the vertical middle of the screen and it's all scrunched up.  Compare that to Chanalyzer 5: 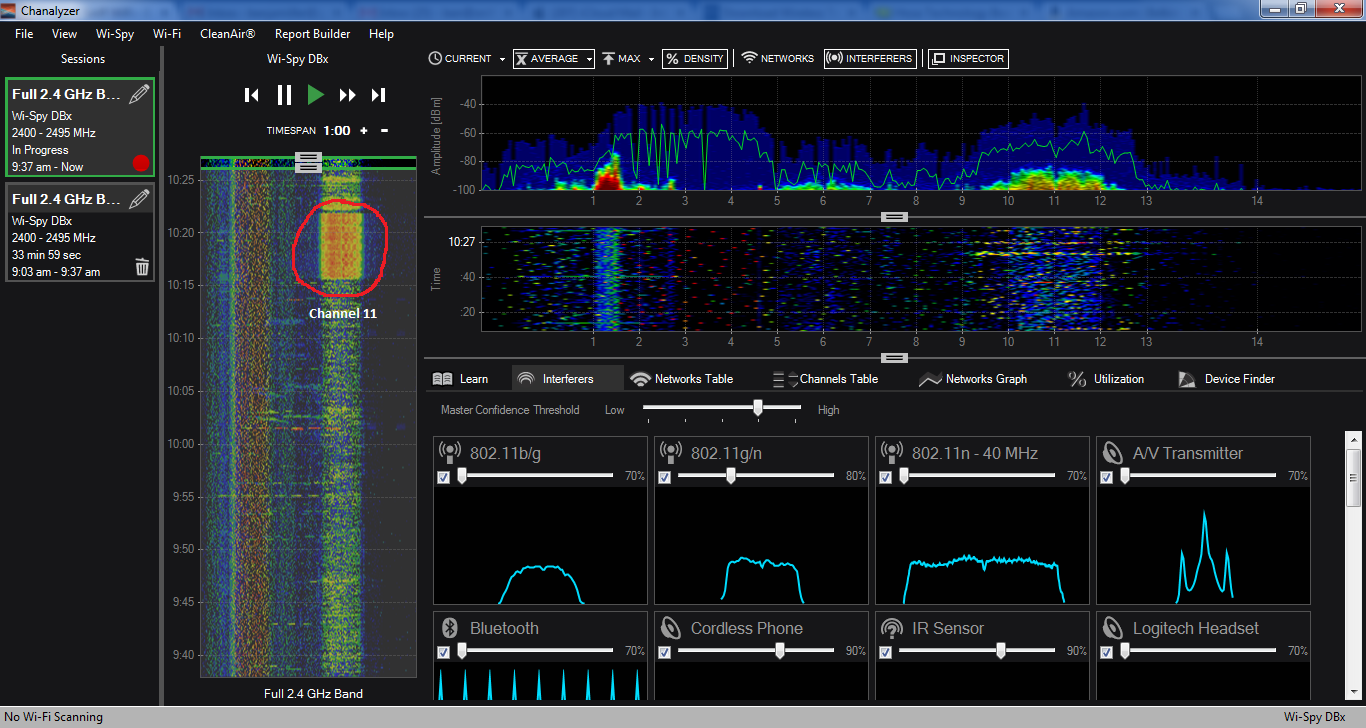 The waterfall view has been moved to the second pane from the left and has been elongated vertically.  Notice how I circled the frequencies of channel 11 in that waterfall pane.  Since the pane is taller it makes it much easier to tell how long an interference source was running for.

The second big improvement with Chanalyzer 5 is in device identification.  Several years ago when I first used Chanalyzer Pro (an old licensed alternative to free Chanalyzer versions), I was disappointed in the device identification features.  I would turn on interfering devices like Bluetooth keyboards and get no notification.  I would then turn on the same interfering device near the old Cognio Spectrum Expert (bought out by Cisco years ago) and I would get an interference notification.  It soured me to the point that I stuck with the free version of Chanalyzer in spite of its limitations.  Now, things have changed.  Chanalyzer 5 allows the user to adjust the certainty of device identification, and it really helps.  In the office park where I tested Chanalyzer 5 today, it identified a Motorola Canopy system running outside the building and a wireless video monitoring system running inside.  I had to allow Chanalyzer to notify me with less certainty in order to get the flashy pop-up, but it worked.  I was very pleased.

So Chanalyzer 5 is a good product, you say, but what about yours truly's previous blog?  What about the argument that WiFi protocol analyzers are more important and that 90% of WiFi problems can be identified without having to use a spectrum analyzer?  Well, I stand by those statements.  But that doesn't mean that spectrum analyzers are worthless (the way that most frame captures from distributed sensors are [you didn't think I could write an entire blog without at least one potshot, did you?]).

A spectrum analysis package like Metageek's WiSpy/Chanalyzer 5 combo is good in a few situations. It's good for skilled WiFi folks because it helps in those 10% of situations where a protocol analyzer fails to reveal the source of the problem and it is easier to communicate with.  When I show a WiFi novice a Retry percentage, it sometimes fails to resonate.  When I show a WiFi novice that last screenshot I posted above, it always resonates.  It's red, and red is bad.  That is also why spectrum analyzers are great for the middle class of WiFi workers.  If you know WiFi pretty well but have too many other duties to be able to dedicate yourself to learning every nook and cranny, then spectrum analyzers are great for pointing you in the first direction.  If my smartphone were on Channel 11 and Chanalyzer 5 started looking like that last screenshot, I would know that something rocked the channel for about 30 seconds or so.  That's useful information.

My last note about Chanalyzer is to folks who already have distributed spectrum analysis systems.  It could be Cisco Clean Air or Aruba's RF Protect module or maybe even Fluke's AirMagnet Enterprise system with spectrum sensors.  Even if you have your enterprise covered for spectrum analysis using sensors, it still helps to have a portable tool.  Radio frequency properties can be very different and different locations, so having a tool that runs on a laptop and that can be moved to the exact location of the problem is often very revealing.  Chanalyzer isn't the only option for portable spectrum analysis (there's still AirMagnet Spectrum XT and, if you can tolerate a PC Card-capable laptop, Cisco Spectrum Expert), but it's a great tool at a decent price and it's the tool that I use on the rare occasions that I am unable to identify the source of the problem using a WiFi frame capture.


If you like my blog, you can support it by shopping through my Amazon link or donating Bitcoin to 1N8m1o9phSkFXpa9VUrMVHx4LJWfratseU