July 31, 2014
I've seen a lot of inexplicable stuff in my day.  Landlords advertising Free WiFi and then telling you to use the neighbor's.  Twitter praise from people whose employer I had just criticized in a blog post.  USC journeyman quarterback Mark Sanchez picked fifth in the entire NFL Draft.  But when I saw that my sturdy Apple Airport Extreme (single radio, dual band, two-stream 802.11n) wireless router was tagging all of my apps as Background traffic, I just couldn't explain it.

For those who are unfamiliar with WiFi quality of service (QoS), a quick primer:

WiFi Multimedia (WMM) certified devices use QoS protocols from the 802.11e amendment.  Primarily, that means classifying APPLICATIONS (not networks, not devices) as either Voice, Video, Best Effort or Background.  What happens when a device classifies an application as Voice (highest priority)?  Whenever that device is ready to send a frame (sometimes called a packet) from that Voice application the device has to wait less time before sending.  What does less time get you?  It gets you a better chance of being the next frame to use whatever channel you are on.

The bottom line is that you want voice applications to be Voice.  If an app is Voice, there is a better chance it will work if your AP's channel gets congested.

What you don't want is for your voice applications to be Background.  Background is the lowest priority level.  Apps that are Background have to wait the longest possible amount of time before the device sends their frames.  That is bad.  It makes those apps vulnerable to shabbiness when your AP is on a congested channel.

So, what is my sturdy Apple Airport Extreme doing?  It is classifying EVERYTHING as Background.  TruPhone (my preferred voice app when traveling internationally), Facetime, the WWE Network and MLB At Bat were all sent using Background by my Airport Extreme.  My iPod Touch (rapidly becoming my favorite WiFi surveying device) wasn't using Background for those apps.  It was using Best Effort.  In fact, it even used Video for some packets when I ran the Dish Anywhere app.  But look at this Wireshark capture from when I ran Facetime (sorry, I was too lazy to plug in my OmniWiFi and run WildPackets OmniPeek on my virtual machine): 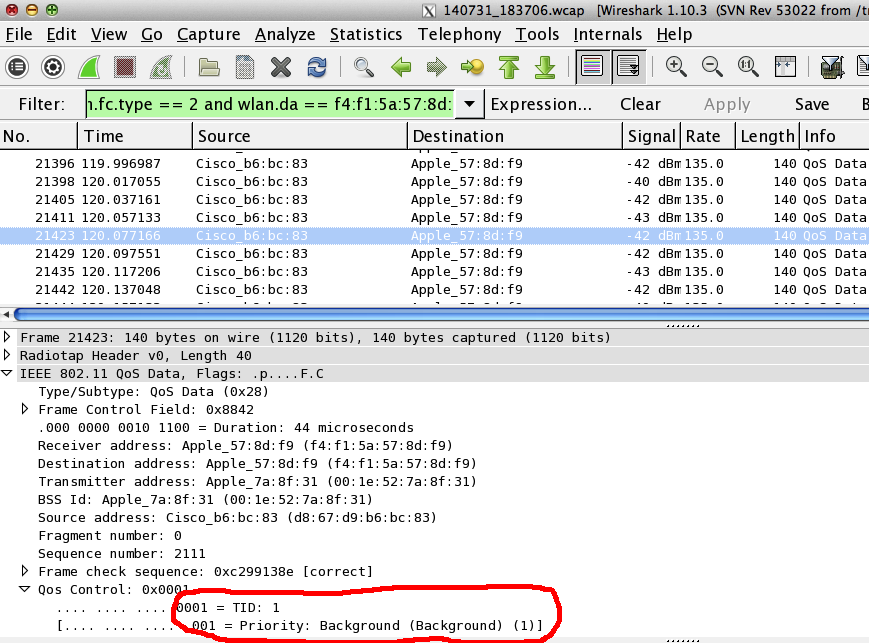 That's Background, Apple!  For a voice app!  THAT YOU MADE!  Whyyyyyyyyy?!?

Maybe it doesn't matter that much.  Maybe it's just my router.  (It is old enough to be single-radio, you know.)  Or maybe Apple has some cool new protocol going.  Maybe Apple's WiFi team found out that if you have a clear channel, that the extra quiet time between frames for Background devices (seven slot times during the arbitration interframe space [AIFS] instead of three slot times for Best Effort or two for Voice & Video) results in fewer collisions.  Yes!  That's it!  Apple figured out something none of us knew and is saving us from collisions without us even knowing it!  (Actually, no.  I switched to a crowded channel and the Airport Extreme kept on churning out Background frames for Facetime.)

The truth is I don't know why my wireless router was classifying my voice and video apps as Background.  I know the Cisco AP in the office wasn't.  See: 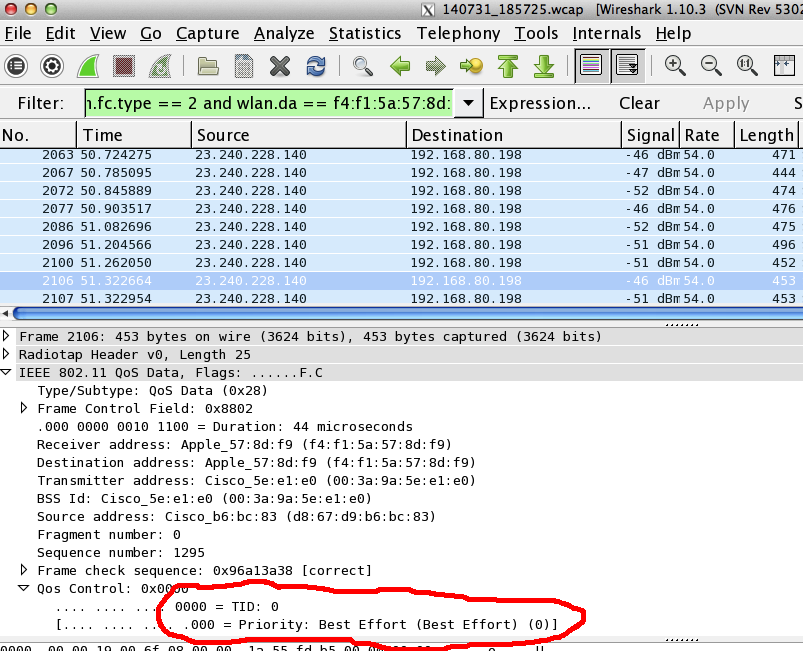 The thing that really bugs me is that I recommend the Apple Airport Extreme to people all the time.  As consumer-grade wireless routers go, I find it to be the best.  It doesn't block wireless printing (a problem that a lot of Arris wireless modems seem to have), it doesn't require random power cycles (a problem that every other wireless router ever seems to have) and it has good range.  I like it.

I have another Airport Extreme, a more modern one, that I'll test when I'm back home in Los Angeles.  For now, I will just remain perplexed.  Why does Apple (at least for traffic coming from their wireless router) want my Facetime to have low priority?  I don't get it.