Capacity or Coverage or Neither?

September 05, 2014
In the beginning, there was Coverage.  And so it was that 802.11 and his only begotten Son, WiFi were blessed upon PCMCIA cards who doth receiveth adequateth Coverage.

And then as Coverage grew and the lands of Tablets wereth discovered, so came Capacity.  And thus did Capacity grow to represent all that was good and great about deploymenteths upon this fruitful land.

And now, my Sons and Daughters, things have changeth again.   For Coverage and Capacity will both leave the Higheth of Densiteth WiFi wanting.  And so we shun them both.  For it is Neither -- Coverage nor Capacity -- that will taketh thy to the WiFi promised land.

In case it was unclear, designing wireless LANs for Capacity has become an article of faith in some circles.  Keep it to 40 devices per AP.  Or 50.  Or 150.  Whatever the number is, the whole concept is misguided.

WiFi uses radio frequency as its physical layer, and there is a finite amount of radio frequency in any given location.  If every radio frequency channel gets used up, then adding more access points to fulfill a Capacity requirement becomes counter-productive.  It becomes the equivalent of adding a Hub to handle a high density wired LAN.  A hub doesn't add additional access.  It just splits up the existing access; often degrading the quality of the network.  Same thing for adding APs to occuppied channels.

A lot of people understand that having more than one AP on the same channel is a problem, and that's good.  The problem is that some of those people go about designing a wireless network for one-AP-per-channel in the wrong way.

Imagine that the diagram below represents the APs that are on channel one in my high density area: 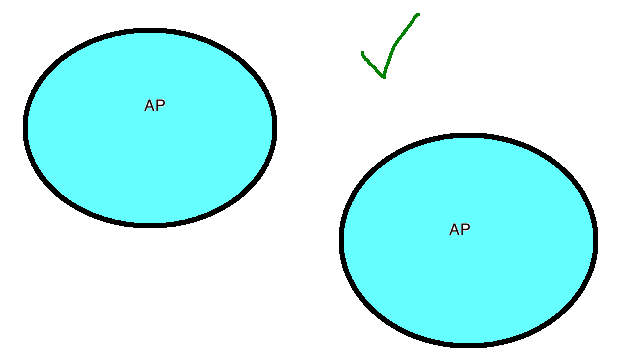 The problem with the above picture is that it is often accomplished by turning down the power on APs.  DON'T DO THAT.  It usually results in a Capacity-based design failing once put under stress.

Here's what happens when a Capacity design with low AP transmit power starts to get crowded: 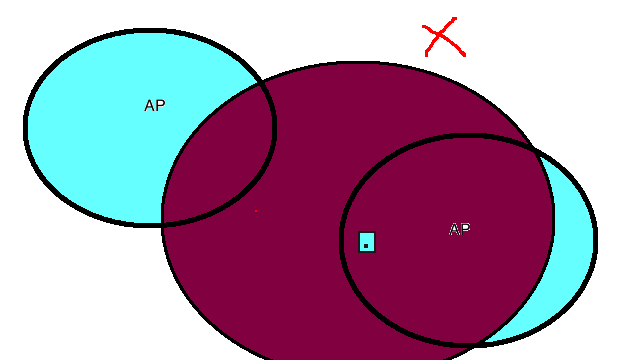 Consumer devices (smartphones, tablets, laptops, etc.) typically don't lower their transmit power to the level of APs.  That ends up ruining your previously-thought-to-be-solid design.  Users start to connect.  Users' devices start transmitting data.  The radio frequency from that data bleeds into another APs' coverage area.  And the end result is that users in the bleed area get interfered with.  As the room fills up with users, this interference starts to happen so often that the wireless becomes subpar.

When designing WiFi, it's best to ignore both Coverage and Capacity.  Instead, just stick to radio frequency principles.  Keep AP transmit power around 12 to 15 dBm (because that's the range that most consumer devices transmit within).  Make sure that no more than one AP on a given channel is covering any area.  And with those two principles in mind, try to make sure that your signal is strong, your coverage only goes where your users are and you create enough overlap if users expect to stay connected while moving from place to place.  Just like the 802.11 Creators intended it.